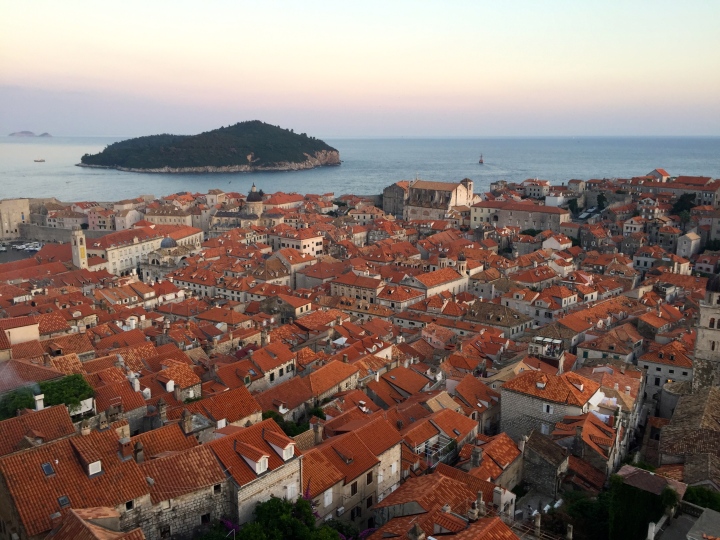 We had no idea what to expect when we arrived in Croatia. We had countless people tell us how “beautiful” or “amazing” it is but we couldn’t really visualize what that meant. Turns out, they were all right but going into it with no expectations only emphasized the beauty of the country with its lush hillsides, medieval stone towns and and clear blue waters.

We landed at the Duborvnik airport and took the Atlas Airport Shuttle Bus which dropped us right outside the Old City walls 30 minutes later for 40 Kuna a person. We stayed inside of the Old City walls and our first impression was how busy Dubrovnik was, it was teaming with people both inside and outside of the wall.

After checking into our Airbnb, we wandered out in search of food and were completely overwhelmed by the options. There are cute cafes and restaurants down every street and alleyway and around ever corner. We picked a spot that offered us free wine as part of their late lunch special – Jelovnik. The service was terrible and food mostly unmemorable except for their vegetable mouska which was a pile of cheesy goodness.

The one thing I really wanted to do in Dubrovnik was walk the Old City walls so we sought out the Wars and Walls guided tour. Note, if you do a guided wall tour, you still have to pay a separate entrance fee to gain access to the wall. Each is 120 HRK. Although, neither of us is super interested in war history, the tour was really interesting and gave us a good foundation for our trip. Not to mention, the amazing views of the Adriatic Sea, Old City and surrounding areas.

We sat down for dinner at Wanda Restaurant because we really liked the ambiance and the food turned out to be good too. After dinner we got ice cream at Dolce Vita and explored the Old City. Unintentionally, we started following signs for “Cold Drinks” and found ourselves at Cafe Buza, located in/outside of the wall, overlooking the water. It has refreshing drinks with nice views, day or night.

Got up early and went to Lady Pi-Pi’s for breakfast. The restaurant is up high so you’ll definitely get your exercise in but you also get a spectacular view of the city in all of its red roof glory.

After breakfast, we set off for Sveti Jakov beach – about a 20 min walk from the Old City. This beautiful stone beach was pretty secluded, quiet and less touristy compared to the more popular and rowdy Banje Beach. If you do make it out to Sveti Jakov, make sure you bring shoes that can handle all of the rocks or you’re in for a painful surprise.

For a cheap and easy lunch, recommend Babic Bakery which is located right outside of the Old City, near the Ploce Gate entrance.

During the Wall tour, we had seen people jumping off rocks and swimming in the sea near the walls so we set off to find out where and how and eventually came across Bard Mala Buza Bar. Similar to Cafe Buza, it is located in/outside of the Old City wall. Here, you are able to jump off the rocks and into the water or simply lay around and have a drink on the flat rocks surrounding the bar.

We stopped at D’Vino Wine Bar to sample the local varieties before dinner at Segreto Pasta & Grill. The food was AMAZING and this was one of my favorite meals while in Croatia. Many people don’t realize that Croatian food is heavily Italian influenced and this place definitely rivals many of the “authentic Italian” restaurants I’ve tried.

After dinner, we went on a self guided bar crawl – Buzz Bar, Dubrovnik Wine Bar, Casablanca Bar and La Bodega Bar. We selected the bars at random and enjoyed the different vibes, people watching and drink variety at each.

Took the 10 minute ferry from the Old Port to Lokrum Island. The island is certainly beautiful with its botanical gardens, wild peacocks and clear waters. It is also much less crowded and quite peaceful. There are many secluded swimming areas where you can jump off the rocks or just lay around. If you prefer a more active route, there’s a walking path you can take to see Fort Royal at the top which also has nice views of Dubrovnik.

If I’m being honest, Lokrum Island wasn’t my favorite spot in Dubrovnik. While I appreciate it’s beauty and serenity, it was a little too quiet for my liking. Luckily, there are ferries that run back and forth frequently throughout the day so after a nice walk and quick dip in the water, we were headed back to Dubrovnik.

For lunch, we stopped for a shrimp burger and calamari at Barba, a fast food spot with unique seafood dishes and local beer. If you go, make sure you decorate a wooden fork and add it to the hundreds stacked up around the restaurant.

We were booked on the 4:30 Krilo ferry to Hvar and took the local bus to the ferry port located outside of the Old City. The ferry took about 3.5 hours with a few stops along the way. Check out the post on Hvar for more details!

Our Airbnb in Dubrovnik is pretty simple and located within the Old City Walls which I would recommend to others visiting Dubrovnik. It also is clean, quiet and has air conditioning which was important to us. When I was looking for Airbnb’s I was so concerned with the location but as long as you’re within the walls, everything is a quick walk no matter where you are. The other thing people seem to comment on is the number of steps up to the apartment. Luckily, ours wasn’t too much of a hike.

I would book an Airbnb early in Dubrovnik if you’re going during high season because we got rejected three or four times before we finally found an open one.

To Dubrovnik: By air via SmartWings Airline.

Around Dubrovnik: We walked everywhere.

Language: Croatian but had no problem finding English speakers.

Outlet Adapter: The standard voltage is 230 V. The standard frequency is 50 Hz. The power sockets that are used are of type F.

Passport/Visa Requirements: U.S. Passport valid for at least three months from date of travel. No visa for visits under 90 days required.

Weather: We visited Dubrovnik during July, the sunniest and driest month of the year. Temperatures were high with little to no breeze or cloud coverage.

Hello & welcome to my blog! It is my personal goal in 2021 to bring you authentic, high quality and consistent content about my life, family and travels in hopes to inspire. Putting myself out there like this is one of the scariest things I've ever done and I hope you'll follow along and support me on this journey! xo, Kara 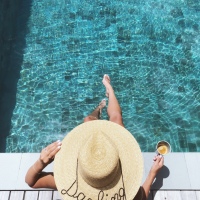 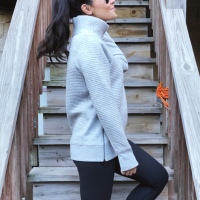 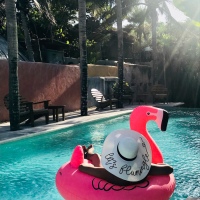 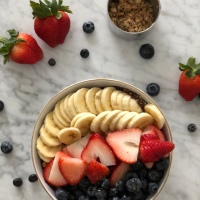 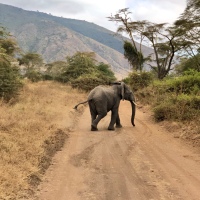 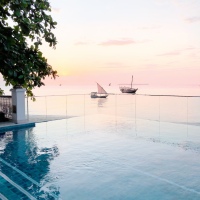